I’ve been collecting images of Perugia towels for quite some time now with the goal of eventually weaving some.

All of the Perugia towels I have seen follow a common design standard: a ground fabric of white linen twill (chevron or lozenge), with bands of a supplementary pattern weft  in a heavier cotton (usually blue) on a tabby ground.  Point twill and tabby go well together, since the threading for the twill is always alternated between even and odd shafts.

From the V&A Museum:

The name usually given in English to textiles like these is ‘Perugia towels’, deriving from tovaglie perugine. Tovaglia would usually be translated as tablecloth, and tovagliolo as napkin, so towel is not necessarily the best defining term for them; their use was in both ecclesiastical and secular contexts, and their function also included napkin and table cover, as well as altar cloth and sacristy hand towel. (In a painting by Antonio da Fabriano in the Museo Piersanti, Matelica, one is depicted as a loincloth for Christ).They were woven in mixed twill, ofter diaper, with white linen warp and weft, and had the characteristic feature of bands of pattern created with a supplementary weft of cotton, almost always dyed blue with indigo or woad, though occasionally in red or brown. Endrei (see bibliography) speculates that they were woven by fustian weavers, who were prohibited by statute from weaving in pure linen, or in plain weave. He thinks it plausible that as cotton takes indigo dye much more successfully than linen, fustian weavers were motivated to produce these textiles with strongly coloured bands of cotton decoration which linen weavers could not achieve.

Antonino Santangelo in The Development of Italian Textile Design(1964) quotes from an inventory of 1482, which describes two napkins being ‘…in the style of Perugia’ (banbagia a la perugina); if we infer that these are the blue banded towels under discussion, the association of them with this region appears to date back to at least the 15th century. However, Peter Thornton (The Italian Renaissance Interior 1991), while mentioning a reference to tovallie alla perugina in a 1574 inventory for Vasari’s house in Venice, cautions that transcribers of inventories might misread alla parigina, meaning ‘in the Parisian fashion’, which he thinks likely to mean simply diaper-patterned; the finest table linen was produced in northern France, particularly Paris. Endrei suggests that the towels’ origin, influenced by designs from silks woven in Lucca, could go back to the 14th or even 13th century.

Perugia towel at the V&A Museum

Perugia towels come in a wide range of sizes, so I could choose whatever I wanted (within reason).   I thought I’d go with a small hand towel width to keep it under budget.  I haven’t found any drafts for extant towels, but inspecting photo that gave me as much detail as possible it appears some of them are woven in a 3/3 bird’s eye twill, so that’s what I’ll use.  The white is 40/2 linen, and the blue is 8/2 unmercerized cotton.

The designs are mirrored – in some there is even text that ends up backwards in places.  This points to some sort of secondary harness rather than pick-up, which makes sense for the time and place these textiles are woven.  For this project I wanted to try half-heddle pick-up to simulate the second harness.

In half-heddle pick-up, the second harness is created with individual sticks (heddle rods), rather than integrated shafts.  The heddles on these are looped around the threads in question, and then pack up over the save stick (thus creating a ‘half’ heddle).  The heddle rods are then manually lifted as needed and a weaving sword (another big stick) is inserted to maintain the lift on the pattern threads while weaving.

Unfortunately, I got over ambitious in what my loom could handle.  I see why the recommendation is no more than 10 heddle rods.  The 20 I tried just did not work with the length of my loom.  So I’m doing regular pick-up instead.  I still learned a fair bit about the mechanics of compound harness weaving, so the time was not ‘wasted’.

My particular plan uses 6 shafts and 10 treadles. The first 6 treadles are used for the 3/3 lozenge twill. The next two for tabby, and the last two for binding down the floats.

And here is the finished towel… 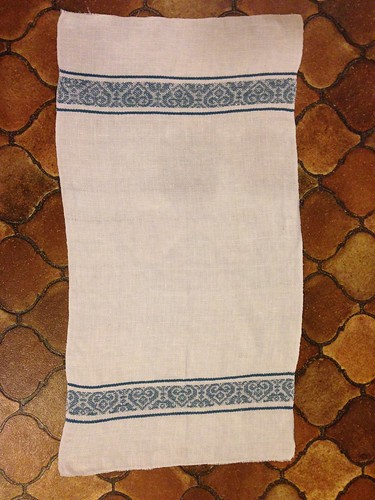 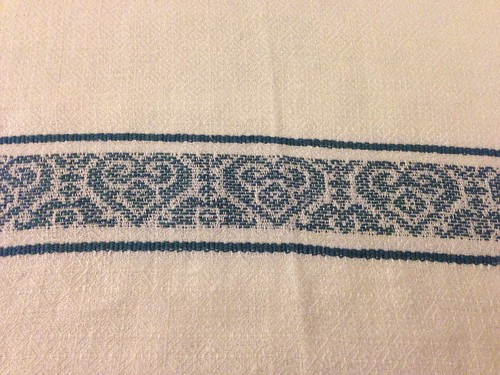 Close up of the patterned band