For the compound harness samples I’ll be doing things a bit differently.  Rather than keep the same sett the same for each weave, I will be using the sett that works best for the textile in question (or should I say, my best guess).  The fabrics just won’t look right if I use the same sett I used before.  And I’d really like the fabrics to look right, so people can get a better idea of what they are supposed to look like.  To start I will still be using the same 8/2 unmercerized cotton. It’s readily available and inexpensive enough I won’t feel terrible if it all goes haywire.

I’ll be using these samples as a way to learn how to use my drawloom, so I expect there will be a fair amount of trial and error.

First off, I need to pick a relatively simple pattern that I can re-use to show the differences in weave.  As there are multiple wefts, the concept of dividing the sample into halves using different weft colours doesn’t work.  My plan is to divide the sample into thirds, instead.  The first third will be two colours plainweave (to show the ground fabrics without figuring, the second will be figured but monochrome to shoe the contrast of the figuring, and the third will be figured and ducochrome showing the full effect.

I’ll use the same pattern for the first batch of samples, and the same thread, and that should hopefully better show the difference in the weave.

I’ve decided to use an all-over design from Il Burato (Paganino, c. 1527), which is probably for lace but it will work.  Looking at it, it appears that this repeat of the pattern is 17 high and 10 wide, which seems a good small repeat for a learning exercise. 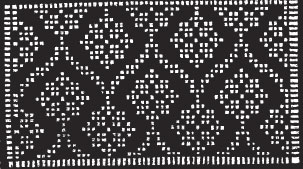