An irregular twill has floats of varying lengths, breaking up the twill pattern. In a broken twill the threading is also displaced, causing a break in the pattern. 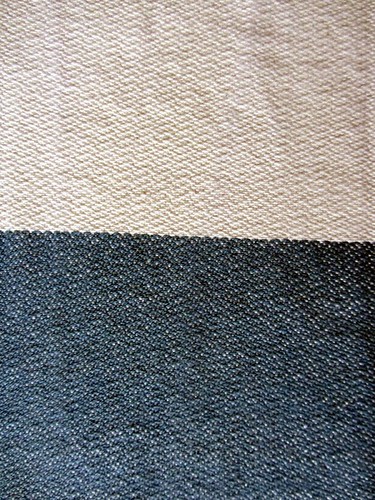 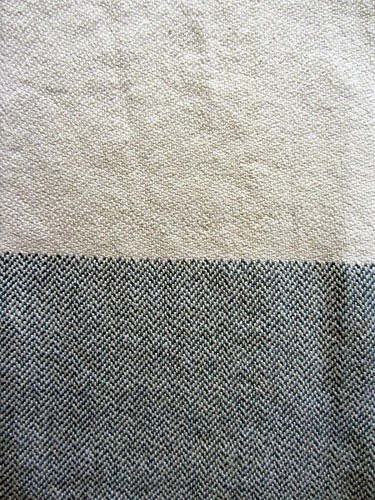 The reverse of the irregular broken twill above 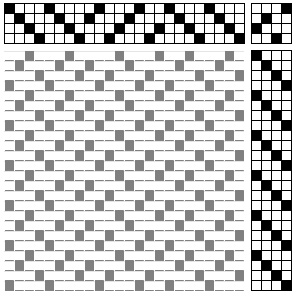 Broken twill (kreuzkoper) is produced when the twill weave is reversed and broken every two threads. 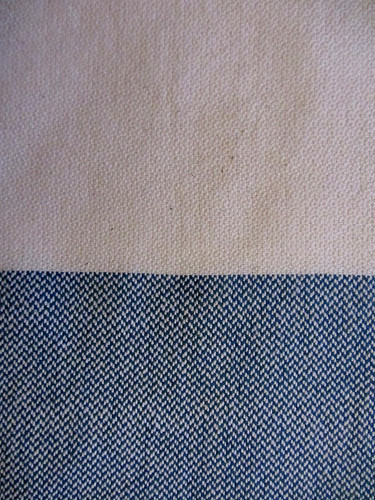 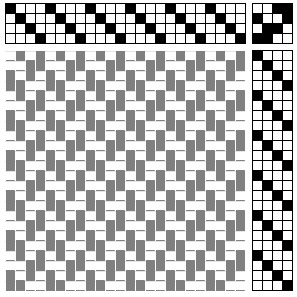 [1] The Continental Germans by Lise Bender Jørgensen (in The Cambridge History of Western Textiles)
[2] Textiles, Cordage and Raw Fibre from 16–22 Coppergate by Penelope Walton
[3] Some Finnish Archaeological Twill Weaves from the 11th to the 15th Century by Heini Kirjavainen and Jaana Riikonen (in NESAT IX)
[4] The Textiles from Nørre Sandegård Vest by Ulla Mannering (in NESAT VI)
[5] Late Saxon Textiles from the City of London by Frances Pritchard

To finish the fabric before cutting, I ran it though the washer/dryer on the delicate cycle. It now measures 5.31 yards at 20″ wide, meaning approximately 16% shrinkage in length and 15% in width. I estimated 13% and 15% respectively, which means I’m right on target for the width. A bit shorter won’t matter.

After washing - the wool has fulled and is thicker.

What I have learned so far in this project

I didn’t have any fraying issues on my sample, but I definitely did on my actual yardage. I think part of the issue was weaknesses in the yarn itself (there were some finer/looser spun patches), and part of the issue was the increased width meaning more take up. I had more tension on the warp, too, because I couldn’t just pass the shuttle through and therefore had to support its weight. I’ve never woven with wool before, so I’m not sure if this is common problem or just a deficiency of this yarn. I think this might be more a problem with this yarn than anything else since I am using cheap knitting yarn.

I am attributing the root cause of all of my problems in this project so far as inexperience with the materials. I’ve never woven with wool before, let alone this wool. If I had, I might have anticipated my problems and taken steps to prevent them.

I chose this yarn because when I ordered the yarn for my samples the price was much cheaper than that of Harrisville Shetland. Unfortunately, Knitpicks raised their prices (almost doubled them!) before I ordered the yarn for the project itself. It was still cheaper, but not by nearly as much (around $50 less, compared to the over $100 less when I was planning the project). I’d like to try another project in the palette yarn but soaking the warp in sizing first and using a temple. After all, it comes in over 100 shades, the finished fabric turns out nicely, and it still is cheaper. If it behaves well with these extra steps it might still be worthwhile to use it again. I haven’t worked with the Harrisville Shetland before either, so I’d like to try a project in that as well to compare. If it behaves much better and I like the finished fabric it may be worth the extra cost just to save myself the frustration.

All in all I am satisfied with the end result. The problems are all in the selvedges so it won’t show in the finished garment (unless you check my seams).

I also learned that some of my odd warp stretching problems can be solved by keeping the door to the craft room closed.

I had planned my pattern, then changed it.

So, here is my final final pattern.  It has to be – I’m about to start weaving the gore panels.

I’ve been working on cleaning up the documentation for my apron dress, and it’s lead me to rethink my bias-to-bias gores.

The aprondress fragment at Haithabu is described as ‘such as the clothing of the Danish Queen Margareta,’  which is flared.  I’m arguing that the Greenland gowns (also Norse, also the same era), use gores – so gores are okay.  I pulled out the book to cite my source, and upon flipping through realizes that, really, all the dresses use bias-to-straight construction.

It means I need to weave an extra 4 or 5″ of orange on the ends of my gore pieces.  I’m sure glad I haven’t woven them yet.

Edit: This pattern has since been modified.  See the newer version here.

A couple of people have requested the actual pattern for my Norse aprondress, so I’m including it here.

To see a photo of my mock-up, as well as my research, go to this post.

I modified the pattern to use gores rather than the curved seams used in the Margareta gown in order to reduce the amount of fabric waste.

I’ve since made some modifications from my mockup to the pattern.

I am not attaching the gores straight-edge to straight-edge.  I did this for design considerations of the fabric stripes along the hem.  This should also eliminate any potential puckering of the straight to bias seam.  In order to prevent stretching on the bias-to-bias seam, I plan on doing a tablet-woven seam to reinforce it.  Since the Margareta gown uses curved seams (integral gores?), they would also be bias-to-bias.

The finished pattern will require approximately 5 yards at 20″ wide (four 44″ long panels).  Narrower widths are easier to weave, and I can use the selvedges as much as possible to avoid fraying edges.

As you can see,  I made the gore fabric a little longer to avoid stripes at the tops of the triangles.  This caused some fabric waste, but I felt it was better from a design perspective.  Since I’m weaving the fabric myself, I have absolute control over the placement, spacing, and width of the stripes.

I have placed the shoulder straps closer together on the back than in the front.  I found this placement more comfortable, and kept the straps from slipping off my shoulders.  I may modify this placement once I try the actual wool dress on, as the material will be much heavier.

The Haithabu fragment had a dart in it, and I will likely add the same to the side backs to improve the fit.

Of course, all of this will depend on how the finished fabric turns out, and how the garment feels/fits once I have it on.

Measuring the sample before and after finishing gives me the rest of the data I need to calculate how much yarn I need to buy.  The Handweavers Guild of America has has a great article on how to calculate this, which I’ve drawn from below.

First, the calculations for take-up and shrinkage:

Next, determining how many warp ends I need:

Then I need to determine the length of each end:

This gives us the amount of yarn needed for the warp:

This is a much simpler calculation.  Since I’m only doing a few decorative stripes of red (say, 12″ maximum), I will calculate as if the whole thing was orange.

My loom arrived, but was damaged in shipping—I need to wait for a replacement part.  It’s not the end of the world and everyone has been super about handling the claims/replacement process.  While waiting, I worked up the wool samples on the old loom.

These samples were all woven from Knit Picks Palette yarn at 15 epi.  The colours are Semolina and Safflower (the two yellows, half on one side and half on the other), Kumquat Heather (orange), and Serrano (red).

Here they are right off the loom.

And here they are after wet finishing.  As you can see, wet finishing really changes to look of the fabric.  The wool shrank and bloomed quite a bit.  The broken twill shrank a little more width-wise than the broken lozenge twill and feels slightly thicker.

I definitely prefer the contrast provided by the slightly lighter yellow.  I also think I will go with the broken lozenge twill.  It just has more of a definite pattern.  I think the broken twill would need greater contrast or a less bloomy yarn to look it’s best.

The loom arrives tomorrow, and the first thing on it will be the wool for my apron dress.

There are two yellows, an orange, and a red. I will only end up using one of the yellows in the final product, but I’m going to sample with both to see which one I prefer. I am also going to sample two different weave structures, broken twill and broken lozenge twill, for the same reason.

My plan for the apron dress was to add a couple of horizontal stripes into the weave.  I figured, since I’m weaving this specific to the pattern, why not have some fun with it.  Looking at my mock-up, I’m seeing a flaw in the plan.

By using rectangular construction, my side gores are never going to sit parallel to my front panel.  This means my stripes won’t be straight.  I knew as much, but had hoped it would not be as pronounced.

In the photo below, I’ve tried two different ways to set my gores.  On the left, the bias is sewn to the straight body sides.  On the right, I’ve sewn straight to straight.  The yellow lines give a better outline of the edges.  The red line represents the woven stripe.

If I go with the option on the left, I can lengthen my gores and trim to get a straight hem.  If I choose the right, I can to trim off the excess and reinforce the seam to prevent stretching (perhaps with a tablet-woven seam).  The trouble is what to do about my stripes.