Since I was already set up for tabbies and twills, I wove a few ‘rayed cloths’ as well.

Rayed cloths are tabby-woven with decorative bands of weft-faced extended tabby and/or 2/2 twill. In my samples the bands should be beaten much harder to make them more weft-faced, but the cotton didn’t have the give I would have been able to get with wool or silk. 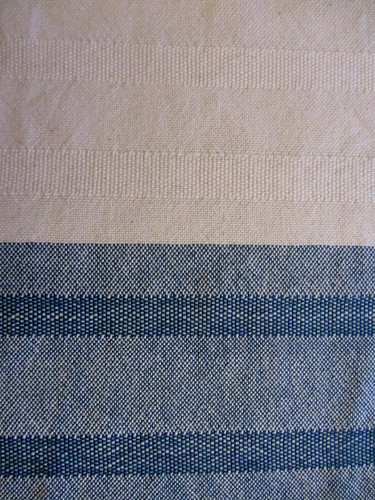 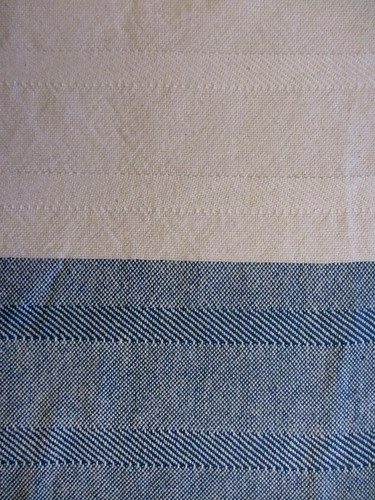 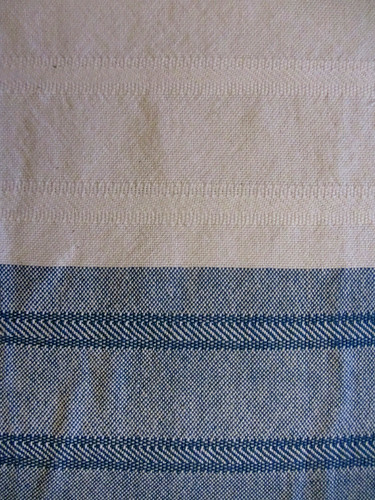 This weave structure is a simple variation on tabby weave, achieved by pairing the warp and the weft. 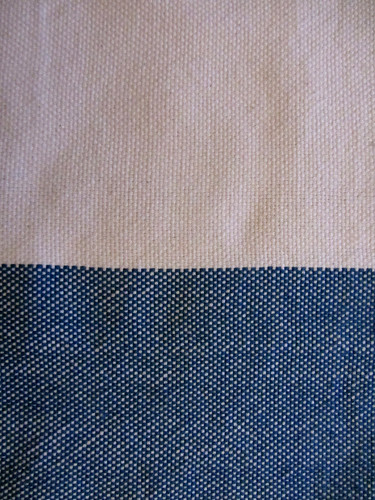 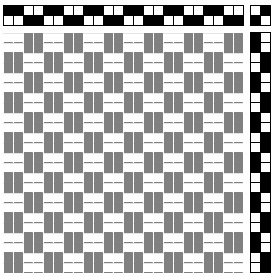 This weave structure is a simple variation on tabby weave, achieved by pairing the warp or the weft. 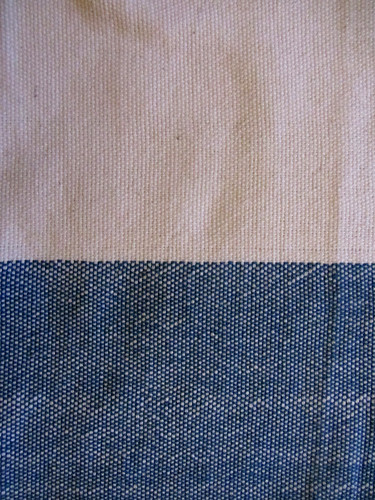 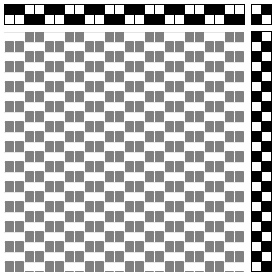 The first sample is tabby, also known as plainweave.  This is your basic one over one under weave.  Tabby is the simplest weave structure, and can be found almost universally throughout history in various fibres. 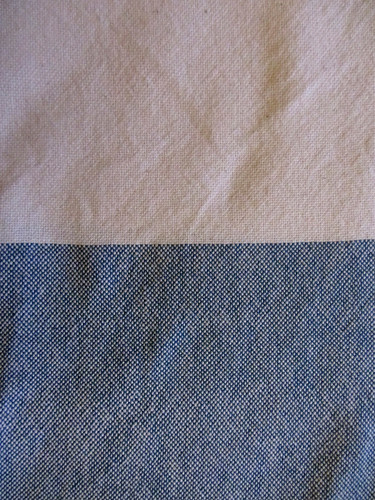 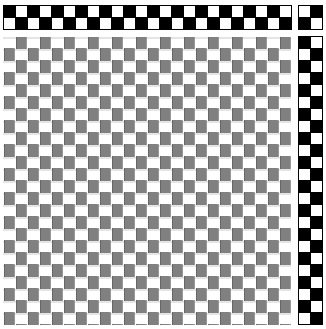 [1] Costume in the Early Anglo-Saxon Cemetery at Saltwood, Kent by Penelope Walton Rogers
[2] Textiles, Cordage and Raw Fibre from 16–22 Coppergate by Penelope Walton Rogers
[3] Dress, dress accessories and personal ornament Textile and yarn by Penelope Walton Rogers (in Craft, Industry and Everyday Life: Finds from Medieval York)
[4] Sails, Sacking and Packing: Textiles from the First Century Rubbish Dump at Berenike, Egypt by Felicity C. Wild  (in Purpureae Vestes)
[5] Silks from Kwidzyn Cathedral, Poland by Malgorzata Grupa (in NESAT X)
[6] Evidence of War and Worship: Textiles in Roman Iron Age Weapon Deposits by Susan Moller-Wiering (in NESAT X)
[7] Textiles from the 3rd- 12th century AD Cremation Graves Found in Lithuania by Elvyra Peceliunaite-Bažiene (in NESAT X)
[8] Garments for a Queen by Antoinette Rast-Eicher (in NESAT X)
[9] Luxurious Merovingian Textiles Excavated from Burials in the Saint Denis Basilica, France in the 6th-7th Century by Sophie Desrosiers and Antoinette Rast-Eicher (Textile Society of America)
[10] Textile Remains on a Roman Bronze Vessel from Repov (Czech Republic) by Kristyna Urbanova and Helena Brezinova (in NESAT X)
[11] Studies of the Textiles from the 2006 Excavation in Pskov by Elena S. Zubkova, Olga V Orfinskaya, and Kirill A. Mikhailov (in NESAT X)
[12] The poor people from Lønne Hede- Presentation of first century-graves with preserved textiles by Ida Demant (in NESAT IX)
[13] Medieval Clothing in Uvdal, Norway by Marianne Vedeler (in NESAT IX)
[14] A heap of forgotten textiles from the 14th century Danish fortress, Boringholm by Maj Ringgaard and Else Østergård (in NESAT IX)
[15] A glimpse into Shakespeare’s world: late sixteenth-century textiles from the Rose playhouse, London by Frances Pritchard (in NESAT IX)
[16] Textile appearance and visual impression – Craft knowledge applied to archaeological textiles by Lena Hammarlund, Kathrine Vestergaard Pedersen (in NESAT IX)
[17] Textiles found in a Merovingian Woman’s Grave at Beerlegem, Belgium by Chris Verhecken-Lammens, Marc Rogge, and Antoine De Moor (in NESAT VIII)
[18] Early Medieval Costume in Switzerland by Antoinette Rast-Eicher (in NESAT VIII)
[19] The oldest textile items from the reliquary tomb of St. Ludmila by Milena Braverrnanova (in NESAT VIII)
[20] The Romans in the West, 600 BC – AD 400 by John Peter Wild (in The Cambridge History of Western Textiles)
[21] The Eastern Mediterranean, 323 BC – AD 350 by John Peter Wild (in The Cambridge History of Western Textiles)
[22] Textile Pseudomorphs from a Merovingian Burial Ground at Harmignies, Belgium by Lisa Vanhaeke and Chris Verhecken-Lammens (in NESAT VII)
[23] Sixteenth-Century Textiles from Two Sites in Groningen, The Netherlands by Hanna Zimmerman (in NESAT VII)
[24] ‘The Apparel oft Proclaims the Man’: Late Sixteenth- and Early Seventeenth-Century Textiles from Bridge Street Upper, Dublin by Elizabeth Wincott Beckett (in NESAT VII)
[25] The Textile Collection from the 1988 Bessastaðir Excavation by Michèle Hayeur Smith (in Bessastaðarannsókn II Kirkjugarður og miðaldaminjar, uppgraftarsvæði 12-15)
[26] Report on the Textiles from Burgos Cathedral in Patrimonio Nacional, Palacio Real Madrid, Spain by Camilla Luise Dahl, Marianne Vedeler, and Concha Herrero Carretero
[27] Early Textiles Found In Scotland by Audrey S. Henshall
[28] Gallo-Roman Period Archaeological Textiles found in France by Sophie Desrosiers and Alexandra Lorquin (in NESAT VI)
[29] The Textiles from Nørre Sandegård Vest by Ulla Mannering (in NESAT VI)
[30] 12th Century Twills from Bergen, Norway by Ellen Schjølberg (in NESAT VI)
[31] Polish Textiles from Coin Hoards of the 10th – 17th Centuries by Marta Pytlewicz (in NESAT VI)
[32] Medieval Textiles from Waterford City by Elizabeth Wincott Heckett (in NESAT V)
[33] Three Danish graves with textiles from the 3rd-4th centuries AD by Anne Hedeager Krag (in NESAT IV)
[34] An 11th century linen shirt from Viborg Søndersø, Denmark by Mytte Fentz (in NESAT IV)
[35] New Finds of Medieval Textiles in the North of Novgorod Land by Natalia Khvoschchinskaja (in NESAT IV)
[36] Late Saxon Textiles from the City of London by Frances Pritchard
[37] Fabrics in Medieval Dress in Pomerania by Ann Rybarczyk

The underdress fabric is cut and ready to sew. It softened up a bit more with my poor attempt at mangling.
I’ll be sewing the dress with the same linen thread I used to weave it, waxed with beeswax.

Weaving With Linen: What I’ve Learned

The linen is off the loom and finished.  Final measurements, 9 yards at 25 inches wide.

After finishing (but not ironed)

This project is the first time I had done any weaving with linen.  For those of you that warned me it would be a different experience, boy were you right!

No matter how hard you plan, something unexpected will occur.

The linen is warped!

So far, I’ve found the sizing made a tremendous difference. The string was much more manageable that it was unsized.

I have high hopes.

Because of the troubles I had with the wool fraying more than expected I am very sure that I am going to have problems with the linen, which is notorious for it.  To help combat this, I am sizing the warp to increase it’s strength.

I haven’t been able to find any hard evidence of what sizing would have been used in period, I’ve opted to go with linseed.  My assumption is that if they had access to the flax fibre, they would probably also have access to the seeds.

After searching around on the internet it seems a common formula is eight parts water to one part seeds, heated until the mixture has a consistency between coffee cream and egg white.  After 30 minutes, I had what was closer to a very runny hair gel, and stopped there.

The sizing mixture. The dark colour is from the brown flaxseeds in the bottom.

After straining I dipped my warp chains in the mixture.  Boy oh boy what a goopy mess!  I wrung them out as best I could and hung them up to dry.

The warp chains hanging to dry.

Once dry I will warp up the loom as usual, and weave using a temple to help even out the draw in.

After mostly winding my linen warp, I’m rethinking my plans to do a 2/2 twill.  I’m thinking this yarn might look better as plain weave.  Also, with the twill overdress, another twill might be a bit much.

I wound a smaller sample warp, and have been weaving up new samples to test the look of the tabby.

This sample uses the same #10 Belgian linen yarn at 25 epi.  I also did a sample at 30 epi, but it was too heavy – more like canvas

I really do prefer it, so my plans have changed again.